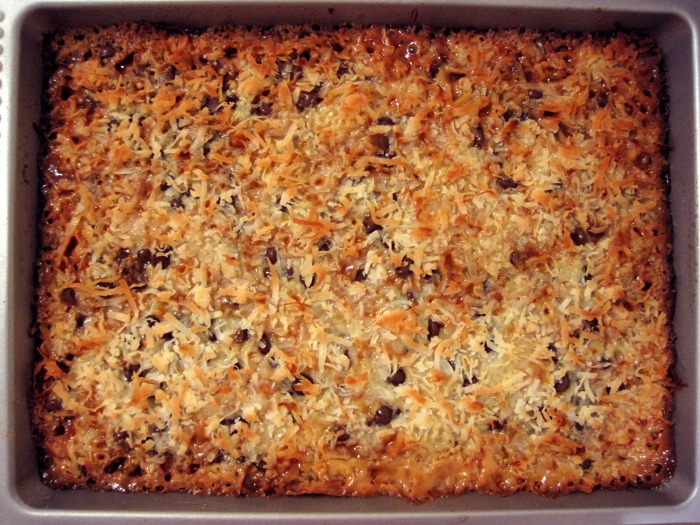 These treats are called seven layer because they are traditionally made with seven ingredients, and are also named magic bars because they are so simple to make but once you take them out of the oven, the results are like magic! When I removed the pan from the oven, the condensed milk was bubbling; it sure looked like some hocus pocus had been brewing while it was in there.

I made these for a party, primarily because it was an easy dessert to make and it was a sturdy bar that could withstand transportation and didn’t need to be refrigerated. I used the recipe from Eagle Brand, and I reduced the shredded coconut by 1/3 cup and still thought it was plenty. A problem I faced was that the bars were too soft in the middle to remove from the pan cleanly. I had left a big chunk in there when I inverted it. I recommend putting the pan in the freezer before you try removing it, and then slicing it when it is still firm but not frozen.

Preheat oven to 350 F. Grease 13 x 9 baking pan. Mix butter and crumbs and pat down into base of pan. Add a layer of condensed milk evenly over crumb mixture. Sprinkle chocolate chips, butterscotch chips and coconut. Bake 25 minutes or until lightly browned. Let cool in pan.