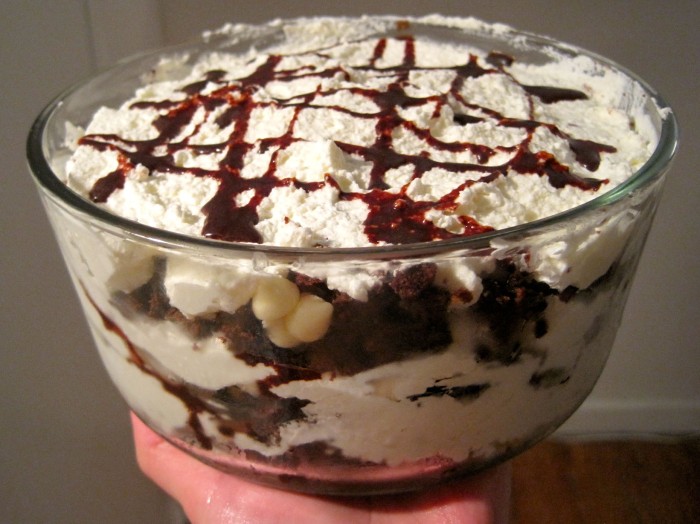 Trifles are one of my favorite desserts to construct. This is why:

1. It’s no-bake and thus super quick to assemble.
2. You can even use all store-bought, ready-made ingredients to assemble your trifle.
3. If your layer cake fails, turn it into a trifled “deconstructed” dessert.

This chocolate cake trifle was borne out of the third reason. I had made a chocolate whiskey cake, only I tweaked the recipe to double the amount of whiskey to 1 cup, and omitted the coffee chocolate chips. If I found the original recipe a tad too sweet, this new incarnation was excessively alcoholic. I legitimately felt tipsy after a slice, and would mostly eat it with a scoop of ice cream to offset the dryness and high alcoholic content.

The poor cake languished in my freezer for a while, until I chanced upon this chocolate sauce recipe. I loved that it didn’t contain any ingredient that couldn’t exist outside the refrigerator, which would imply that it’d have an extended shelf life much like a commercial chocolate sauce. I made a batch of it, and I saw it as the perfect solution to my dry and un-sweet chocolate cake. Then I had another great idea. I had some heavy cream left over from the Sachertorte. What if added a bunch of whipped cream to it and made it a trifle?

I made short work of it, both in making and eating it. I added some white chocolate chips for textural contrast and added sweetness. It ended up being a high whipped cream to cake ratio, which meant that the flavors ended up balancing out perfectly.

Chocolate Whiskey Trifle
This is not so much a recipe as guidelines for freewheeling creativity. Go wild!

1. Start whipping heavy cream on high with a mixer (or laboriously by hand if you don’t have a mixer – it is possible, just tiring) and add granulated sugar to taste.
2. Crumble chocolate cake into a container – ideally glass, so everyone can see the strata that make up your trifle. Spoon some whipped cream into it and even out. Squirt a bunch of chocolate sauce on to it. Sprinkle a handful of chocolate chips.
3. Repeat until a limiting factor presents itself – for me, the whipped cream ran out first.
4. Let sit for an hour so the cake moistens from the sauces and whipped cream. If you’re not patient enough, go ahead and eat it right there and then anyway.