Don’t these brownies look like they have a crispy bacon topping? Yeaaahhh. Unfortunately (or fortunately, depending on who you ask), those golden brown curls with the white edges aren’t crisp-roasted bacon strips. They are actually formed by marshmallows. Pretty neat, eh? I saw this recipe on Cookie Madness, and I was kind of surprised at how mine turned out. It doesn’t look nearly as neat as the one in the picture. It’s probably because I used cut-up pieces of large marshmallows instead of mini ones. 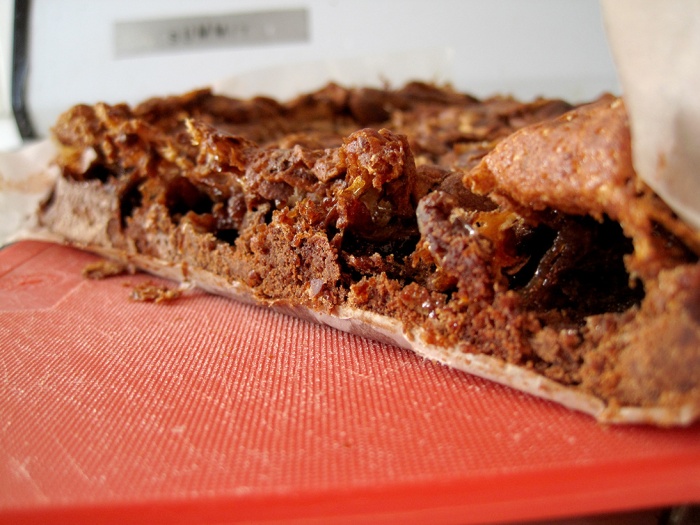 I personally wasn’t very fond of the brownies, because I thought it had too eggy of a taste, and not enough chocolate. I don’t even like marshmallows all that much… I just had some around and I felt a need to use them. I didn’t use chocolate chips in my recipe because I thought the marshmallows would provide sufficient sweetness, but evidently I was wrong. I would highly recommend the use of chocolate chips and pecans as per the original recipe.

Instructions
Preheat oven to 350 degrees F and line an 8 inch square metal pan with foil or parchment paper.
Melt the butter in a large (3 quart) heavy saucepan set over medium heat. Reduce heat to low, add chocolate and stir until smooth. If you are using a metal saucepan and butter is very hot, you can remove the saucepan from the heat and then add the chocolate, letting it melt over residual heat. Remove from heat when melted.
With a large rubber spatula or wooden spoon, stir both sugars and salt into the chocolate mixture. Stir in the eggs one at a time. Add the flour and stir until well mixed.
Fold in the marshmallows.
Pour the batter into the prepared pan and spread it evenly.
Bake for 28 to 30 minutes, or until a skewer inserted in the center comes out moist but clean.
Let cool in the pan on a cooling rack for about 30 minutes, then transfer to the refrigerator and chill for a few hours.
When brownies are very firm and cold, lift from the pan and cut into squares.