Making these cupcakes was also a bit of a triumph for me. My left hand had been bit by a dog in the last month, and the fracture I sustained with the inflexibility rendered by the deep scars meant I was still struggling to hold onto things with my hand, or carry heavy things.

These cupcakes are moist, and almost too oily for me. I think I had rather high standards after having a light and fluffy Two Little Red Hens cupcake, but well, I also don’t run a bakery. Other than that, the cupcake had a distinct red velvet taste – a balance between being tangy and cocoa-y. The frosting is creamy and delicious – I would suggest making sure it’s 100% lump-free before applying it onto your cupcake. I’d say these cupcakes aren’t deathly sweet and actually have a decent balance of flavor. I thought the batter was top-notch when I was licking it off the bowl, mmm. 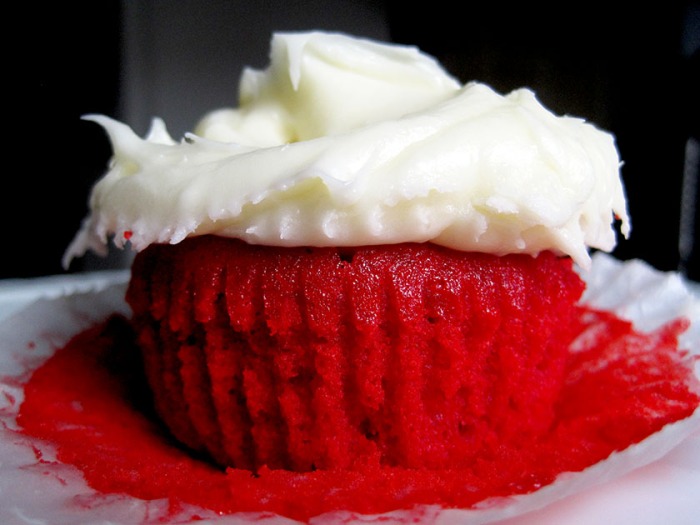 Sift together flour, baking soda, salt, and cocoa powder into a bowl and set aside.

With an electric mixer, beat oil, sugar, and buttermilk until combined. Add eggs, food coloring, vinegar, vanilla and water and mix well. Add the dry ingredients a little bit at a time and mix by hand until well mixed. Be sure not to overmix, or the batter will come out tough.

Line 14 cupcake cups with paper liners, scoop the batter into the liners dividing evenly (a little over halfway full) and bake at 350 degrees F for 20 minutes or until the toothpick comes out clean. Let cool.

For the cream cheese frosting:

Whip the butter and cream cheese together in a mixer fitted with a paddle attachment until creamed. Gradually add powdered sugar to the mixture and scrape down the bowl as needed. Add the vanilla and mix until combined.