I have been baking, but the dearth in posts lately is because I haven’t baked anything worthy of a blog post. I was inspired to make some bacon cornbread recently, but it turned out too dry and bland for my liking. I was determined to make some kick-ass bacon cornbread, and I’m so glad this current version held up. I found a recipe on Allrecipes that has stood the test of user reviews, and decided to use it as my base for the cornbread. 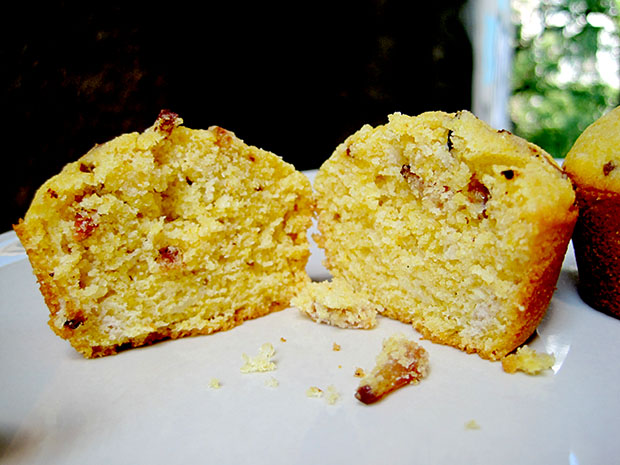 This cornbread is moist and fluffy with a slight gritty texture from the cornmeal, and nuanced enough with flavors of applesmoked bacon and oaky bourbon to be eaten on its own. You’re also greeted with the occasional bit of crispy bacon as you chew each muffin down.

I made a few substitutions that I believe really elevated the original recipe. Firstly, I used bacon fat instead of vegetable oil, which adds an extra layer of smokiness to the cornbread. I’ve been saving all the bacon fat from my various bacon baking experiments, and it definitely came in handy. I also used water instead of milk because I didn’t have milk, but I am of the understanding that milk’s function in most cake recipes is just to add moisture so I felt comfortable subbing it out. I also made this in a muffin pan instead of a cake pan, which meant more crisp, browned edges. Greasing the muffin pan in bacon fat also added a savory crunch to the outside of it. The best alteration was probably the addition of whiskey. I had half a cup of bacon-infused bourbon (recipe) sitting around, and decided to throw it into the mix. I had thought the original batter looked a bit dry, and I’m glad the bourbon didn’t make the cornbread soggy.

1. Preheat oven to 400 degrees F. Grease 12 muffin tins with bacon fat.
2. In a large bowl, combine cornmeal and milk (or water) and let sit for 15 minutes. Combine with flour, sugar, salt and baking powder. Stir in egg, bourbon and bacon fat. Stir in bacon bits.
3. Bake in oven for 15 to 20 minutes, or until a toothpick inserted into the center of the muffin comes out clean. Let cool in pan for 5 minutes, then cool completely on cooling rack.