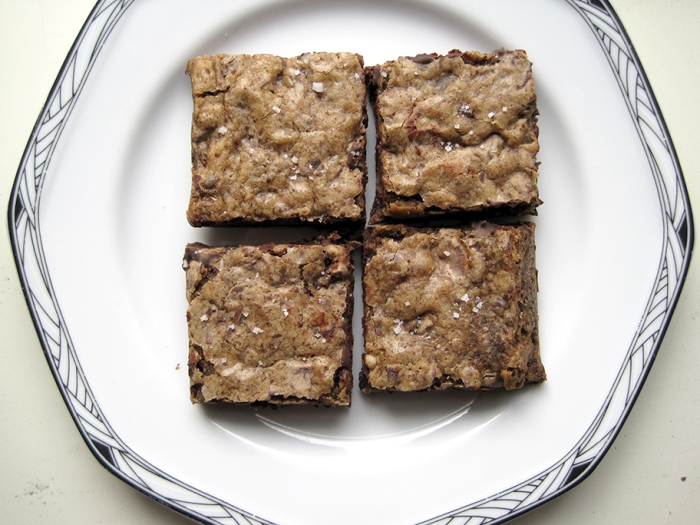 This brownie recipe is the strongest I’ve seen in a while, and will likely go in the hall of fame for being a delicious combination of flavors and textures that are irresistible to me. When I was making the recipe, I was at first a little suspicious. Why is there more chocolate than there is butter? There’s just as much sugar as butter! And one whole TABLESPOON of vanilla? That’s crazy! 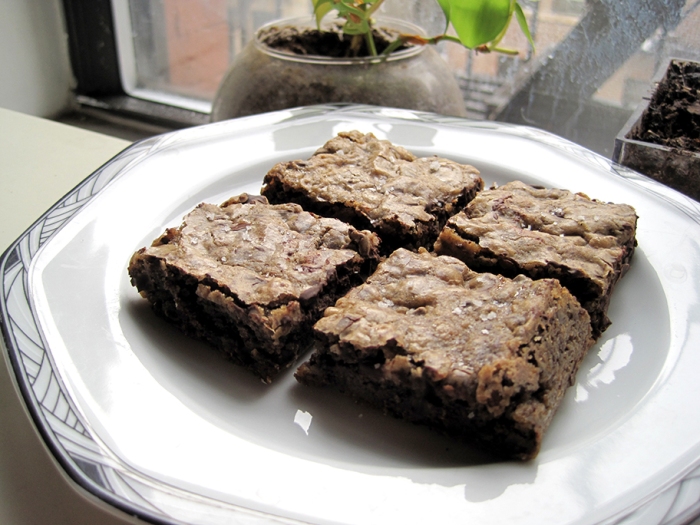 But I persevered and made the recipe as it is and I did not regret it. Firstly, the smell of this is intoxicating. It has the woodsy fragrance of bourbon and vanilla, without an alcoholic bite. It also smells a little comforting like a cup of coffee, even though there’s no coffee in it and I don’t even drink coffee. (But I can appreciate the scent memory it holds for most people.) Be sure not to overbake the brownie, but you don’t have to worry about the brownie not holding together because when the chopped chocolate solidifies, it’ll hold everything together. It’s less a cakey brownie than a chewy, dense one with crunch from the chopped chocolate and, so keep that in mind depending on what you’re looking to make. The sprinkling of fleur de sel on the brownies isn’t necessary, but it does heighten the sweet, earthy, caramelly and woody flavor profile.

Since the ingredients in this recipe are so simple, I highly recommend using good quality vanilla extract and chocolate. I used Trader Joe’s bourbon vanilla, and their Pound Plus Semi-Sweet Chocolate. You do NOT want to use chocolate chips in this once, since it’ll throw off the texture. Take the effort to chop the chocolate, and you’ll be rewarded with craggy, crunchy chocolate bits with a chocolate-flavored batter.

Heat the brown sugar and butter together in a saucepan until the sugar is melted into a gooey mass with the butter, stirring occasionally. Let cool. Whisk flour and baking powder together, and set aside. Add egg, vanilla, salt, and bourbon to the cooled butter mixture, and beat together. Stir in the flour, and then the chocolate, until just combined. Spread batter in the pan, and bake 18-22 minutes, until light golden brown, and a tooth pick comes out clean, being very careful not to over bake. Sprinkle with fleur de sel. Let cool in the pan, then carefully lift sling from the pan and cut into squares.