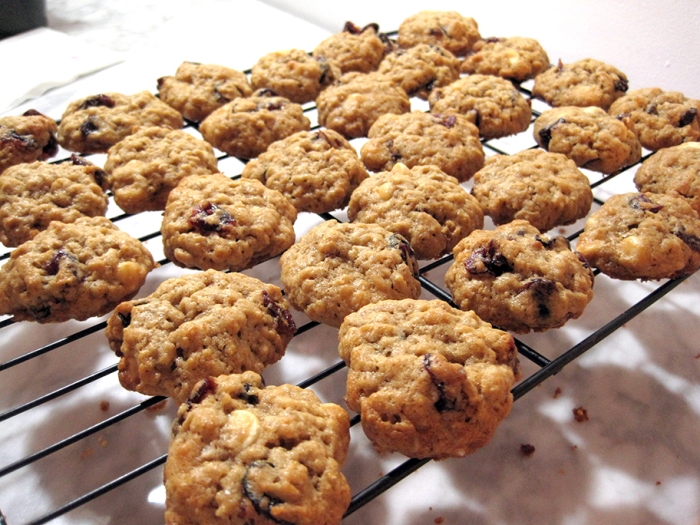 This is the third oatmeal cranberry white chocolate cookie recipe I’ve posted on my blog, the others being Cooks’ Illustrated and Serious Eats, and I think this one is one of the more successful ones. (Got my coworkers’ stamp of approval!) I usually have little faith in corporate recipes and I don’t believe them to be as rigorously tested as other baking blogs, but I decided to give this one a shot because it had a surprisingly low sugar-to-cookie ratio and it also looked really easy. 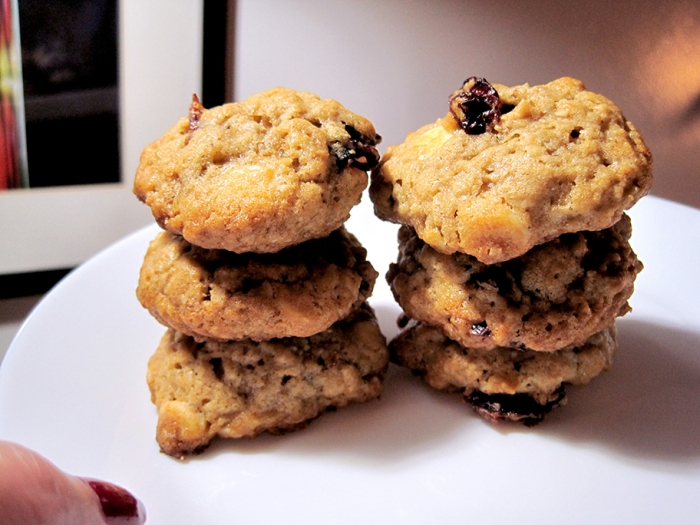 And it turned out great! I loved that it wasn’t too sweet, and it felt almost healthful in certain bites. I feel like most cookie recipes tend to be overly sweet, and I usually have no problems reducing sugar by 1/4 cup or so to no ill effect. The other perk of this recipe is that it bakes at a slightly higher temperature of 375F than the standard 350F, so it didn’t spread out too much, had a crisp edge but still retained a chewy center.

Since it is an Ocean Spray recipe, I found that the 5 oz portion of cranberries that was listed was excessive and I only used about 3 oz, or until the cookie dough looked sufficiently studded with cranberries.

Using an electric mixer, beat butter or margarine and sugar together in a medium mixing bowl until light and fluffy. Add eggs, mixing well. Combine oats, flour, baking soda and salt in a separate mixing bowl. Add to butter mixture in several additions, mixing well after each addition. Stir in dried cranberries and white chocolate chunks.

Drop by rounded teaspoonfuls onto ungreased cookie sheets. Bake for 10-12 minutes or until golden brown. Cool on wire rack.