These days, I bake desserts rather infrequently, and when I do decide to make something, I want it to be worth my while – and I trust Stella Parks from Serious Eats. Her recent April Fools’ article for the site was an embodiment of the surgical attention to detail that she stands for. And her carrot cake recipe is just that. I always read recipes before I begin them, and even then, I made a few mistakes which thankfully didn’t hurt the cake at all.

This carrot cake is really delicious and well worth the hours of attention it demanded. It’s moist, is generously studded with pecans, and the cream cheese frosting is not overly sweet. However, I did make a few tweaks to the original recipe: 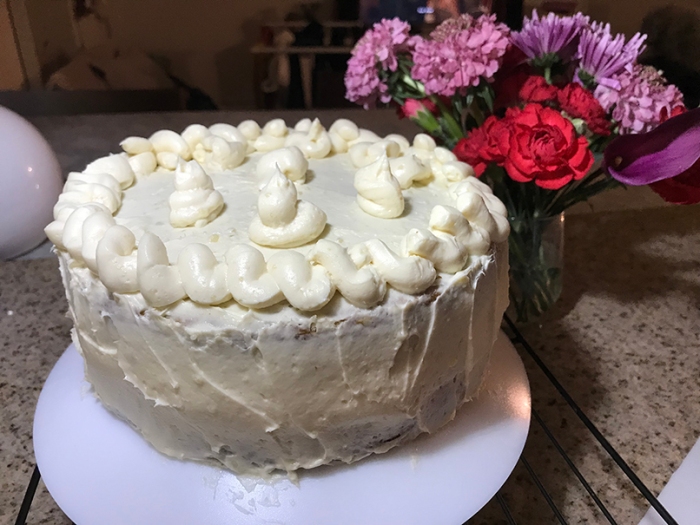 Makes a two-layer 8-inch cake
Adapted from Serious Eats
Note: I’ve modified the recipe and instructions to better suit the half-recipe I made with the inadvertent “healthier” substitutes (i.e. less butter, more carrots).

For the Frosting:
(The amount below makes 50% of the original recipe, but the surface area to be frosted only dropped by 33%. This will mean a slightly thinner frosting than if you weren’t making a half-recipe, but I was fine with the amount of frosting the cake had.)

Instructions
To better synchronize the downtime between recipes, make the cream cheese frosting first, which is made of a custard and a buttercream.

FROSTING, PART 1 of 2: The Custard
1. In a 3-quart stainless steel saucier, combine the milk and vanilla bean and bring to a simmer over medium heat. When it begins to bubble, shut off the heat, cover, and steep 30 minutes. Alternately, cover and refrigerate until needed, up to 24 hours to extract the deepest vanilla flavor. Meanwhile, whisk the sugar and cornstarch together in a medium bowl, followed by the eggs.

2. Return milk to a simmer and discard vanilla bean after scraping out the flavorful pulp inside. Ladle 1/4 cup hot milk into the eggs and whisk to combine. Repeat with a second and third ladleful, then pour the warmed eggs into the pot. Cook over medium heat, whisking constantly, until the custard turns thick and lumpy, about 3 minutes. After it begins to bubble sluggishly, continue cooking and whisking 2 full minutes to neutralize a starch-dissolving protein found in the yolks, and until the custard is smooth.

3. Off heat, stir in vanilla extract, then pour custard into a large baking dish to speed the cooling process. Press a sheet of plastic against the surface and refrigerate until thick and cool, about 1 hour, or to roughly 68°F (20°C). Alternatively, refrigerate up to 1 week and stand at room temperature until warmed to roughly 68°F.

Now that the custard is cooling, move on to making the cake. I would finish the frosting recipe while the cake is cooling.

CAKE
4. Adjust oven rack to the middle position and preheat to 350°F (180°C). Toast the pecans on a baking sheet until golden brown, about 10 minutes, and cool completely.

This would be a good time to shred your carrots, if you haven’t already done them.

5. To make browned butter for the cake: in a small saucepan, completely melt the butter over medium-low heat. Increase to medium and simmer, stirring with a heat-resistant spatula while the butter hisses and pops. Continue cooking and stirring, scraping up any brown bits that form along the pan, until the butter is golden-yellow and perfectly silent. Pour into a heat-safe measuring cup, along with all the toasty brown bits, and proceed as directed, or cover and refrigerate up to 1 week; melt before using.

6. Preheat oven to 350 F (180 C). Lightly grease two 8-inch anodized aluminum cake pans and line with parchment (instructions here). If you don’t have two pans, it’s okay to bake the cakes in stages; the batter will keep at room temperature until needed.

7. Combine white sugar, brown sugar, cinnamon, ginger, baking powder, salt, baking soda, nutmeg, cloves, vanilla, and eggs in the bowl of a stand mixer fitted with the whisk attachment. Mix on low to moisten, then increase to medium and whip until thick and fluffy, about 8 minutes. Meanwhile, whisk together all-purpose and whole wheat flours. Drizzle in the brown butter in a steady stream, then reduce speed to low and add the flours. Once smooth, fold in shredded carrots and pecans with a flexible spatula.

8. Divide batter between the prepared cake pans, about 28 ounces each. If you don’t have two pans, the remaining batter can be held at room temperature up to 3 hours. (Note that if you only have one cake pan, this will mean you’ll have to be in the kitchen at 30 minute to 60 minute intervals. So don’t commit to anything else. Really.) Bake until cakes are golden, about 30 minutes. A toothpick inserted into the center will have a few crumbs still attached, and your fingertip will leave a slight indentation in the puffy crust.

9. Cool cakes directly in their pans for 1 hour, then run a butter knife around the edges to loosen. Invert onto a wire rack, peel off the parchment, and return cakes right side up (covered in plastic, the cakes can be left at room temperature for a few hours).

Now that the cake is cooling, it’s a good time to prepare the buttercream to finish up the rest of the frosting.

FROSTING, PART 2 of 2: The Buttercream
10. In the bowl of a stand mixer fitted with a paddle attachment, beat the softened cream cheese and butter on medium speed until fluffy and light, about 5 minutes. Meanwhile, stir the thick pudding in its dish to create a thick, dough-like mass. Scrape the bowl and beater with a flexible spatula, then switch to whisk attachment and whip on medium speed. Add pudding a few tablespoons at a time, then drizzle in the lemon juice; if you like, season to taste with a pinch of salt (see note). Scrape the bowl once more and whip a few seconds to ensure no lumps remain. The finished frosting should be light and creamy, but thick enough to hang upside down from a spoon.

Once the cake layers are cooled, it’s time to stack it up!

11. I didn’t think the cake needed leveling since they didn’t dome that much, but please use a serrated knife to do so if you wish. I also did not have a cake turntable or an offset spatula, so I placed the cake on an inverted plate and used the back of a chef’s knife to apply the frosting.

13. Decorate the cake with the rest of the frosting. Under a cake dome or an inverted pot, the frosted cake will keep 24 hours at cool room temperature. For longer storage, freeze the sliced cake for a couple of hours until the frosting is hard and no longer tacky. Wrap each slice well with cling wrap to avoid moisture loss or air exposure. Freeze cake for up to a month.